POLK COUNTY, Fla. — An Uber driver shot and killed a man who was threatening and harassing him Tuesday, officials with the Polk County Sheriff's Office said.

The incident began at Grove Lounge on Highway 27 in Dundee, where a bar patron and a bartender summoned a ride for a heavily intoxicated woman, deputies said.

A woman helped the drunken woman into the car and shortly afterward, the good Samaritan's on-again, off-again boyfriend, 34-year-old Jason Boek, called her, officials said. He thought she was riding in the Uber, according to Polk County Sheriff Grady Judd.

Deputies said  Boek sent threatening messages to his ex-girlfriend, who was still at the lounge.

Boek said, "I'm gonna (expletive) up the Uber driver," according to Judd.

Deputies said Boek got into his Ford F-250 pickup truck, turned on the lights and pulled up behind the Uber car that was carrying the drunken woman. He drove beside the car, passed it and then forced the Uber driver to stop, Judd said.

Sheriff's deputies said the Uber driver, identified as Robert Westlake, did not know Boek. Authorities said Boek jumped out of his truck and told Westlake, "You know, I got a pistol. You want me to shoot you?"

Boek then pulled out a black cellphone from his waist, prompting Westlake to shoot him in the chest, deputies said. 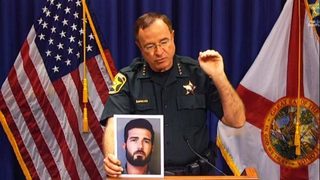 Westlake has a license to carry a concealed weapon and he finished the police academy, Judd said.

After the shooting, Westlake called 911 and tried to "contain the bleeding and give him CPR," Judd said.

"The message is clear. Don't mess with an Uber driver. Leave the Uber driver alone, because he just may be a certified police officer in waiting," Judd said. "This is a justifiable homicide all day long. You have the right to protect yourself. This is a classic 'stand your ground case.'"

Boek's criminal history includes previous arrests for aggravated battery, battery, burglary, marijuana possession, forgery, larceny and resisting arrest. At the time of the shooting he was on felony probation for battery, which began in June 2016 and was scheduled to end in June 2021. His driver's license was suspended in May 2018, and the truck he was driving was borrowed from a friend, authorities said in a news release.

Deputies said they obtained a search warrant for the truck Boek was driving and that they found a marijuana cigarette and a glass pipe containing methamphetamine residue.

The investigation is ongoing.